Love Garth Ennis and Libraries? This Humble Bundle is for You!

Buy a HUGE collection of Garth Ennis' work before "The Boys" comes out on Amazon for just $15 and help support libraries in the process!

With the Amazon Prime Video premiere of The Boys on July 26, Dynamite and Humble Bundle are inviting fans to look back on Garth Ennis's iconic career and stock up on big hits and overlooked gems alike!

The bundle will only be available for a short time, so check it out here! - Garth Ennis Comics Bundle!

The "Pay What You Want" structure used by Humble Bundle gives readers the chance to adjust their purchase exactly to their budget. Three distinct scaled tiers offer the chance to buy up to almost 200 issues - which comes out to over 4,600 pages! All with unbeatable savings of up to 99% off!

The cherry on top is that proceeds from this bundle sale will be contributed to EveryLibrary, a non-profit organization devoted to promoting and defending the role and funding of libraries and librarians across the United States and globally. Libraries play an integral role in societies as a hub of knowledge, and many comic book readers discover their passion at local libraries thanks to librarians' overwhelming support for the art form. Quality libraries strive to make available literary and boundary-pushing artists like Garth Ennis.

Garth Ennis is one of the most acclaimed creators of this era - or any other! Thousands of fans on Comic Book Resources ranked him in the top 15 comic writers of all time! Despite largely steering clear of the mainstream superhero genre, nearly every dedicated comic book reader has had the pleasure of reading one of his stories. The writer redefined the popular antihero John Constantine and from there created one of the cornerstones of DC's mature readers Vertigo imprint with Preacher. That series imprinted on the minds of such talents as comedian and producers Seth Rogen and Evan Goldberg, who produced a television adaptation of the book going on its fourth season. Garth's contributions to Constantine and the Punisher have made it to screens as well.

Dynamite is proud to publish many of Ennis's more recent and greatest works, first and foremost his co-creation with Darick Robertson, The Boys. This 90 issue opus is one of the longest running independent comics in the industry. Dynamite was hand picked by Garth and Darick to pick up the series and support the satirical takedown of the superhero genre through an acclaimed six year run. Now in just weeks, superhero fans all over the world will see these characters brought to life on Amazon Prime Video as portrayed by actors including Karl Urban, Jack Quaid and even Simon Pegg - the original inspiration for the character Hughie!

Other Ennis works from Dynamite and featured in this bundle deal include his emotional and historically accurate Battlefields series, his antihero creation Jennifer Blood and other gems including A Train Called Love and Red Team. The artistic collaborators included in this Humble Bundle are a real impressive cast. Including Robertson, Carlos Ezquerra, John McCrea, Russ Braun, Kewber Baal, Tim Bradstreet, John Cassaday & more! Plus the Jennifer Blood issues written by Immortal Hulk scribe Al Ewing!

"I've done some of my favorite work for Dynamite, and I'm delighted to see The Boys, Battlefields, Red Team, and the rest presented for a new audience," said Garth Ennis.

"As we're getting closer and closer to The Boys debut on Prime, myself and the Dynamite team cannot freaking wait for The Boys to debut," said Nick Barrucci, Dynamite Publisher and CEO. "We thought the perfect way to get everyone ready for the show was to team up with our buddies at Humble Bundle and offer an outstanding deal for those looking to refresh their memories or dive into the series for the first time. Plus all of Garth's other classics we've published through the years! And for a great cause, with EveryLibrary joining on!"

Check out the available tiers below:

It's practically just a tip jar! For this low, low amount fans can still walk away with a sizable bite of the Ennis ouvre!

Raise your contribution up just a tad and a whole mountain of superhero satire and wartime drama are added to the bunch. This is still a better deal than some ridiculous cups of "coffee!"

You don't even have to double up from the previous tier, but you are getting even more than double the comics! The total haul gets insane by this point! You could fill a whole shelf!

Stack it up! Grand total on all this massive loot is nearly 200 issues, 4,600+ pages and 97% savings off of a regular retail price of over $550! All yours for just $15. You'd have to be crazy to turn this deal down - and all from one of the greatest writers in comics history! 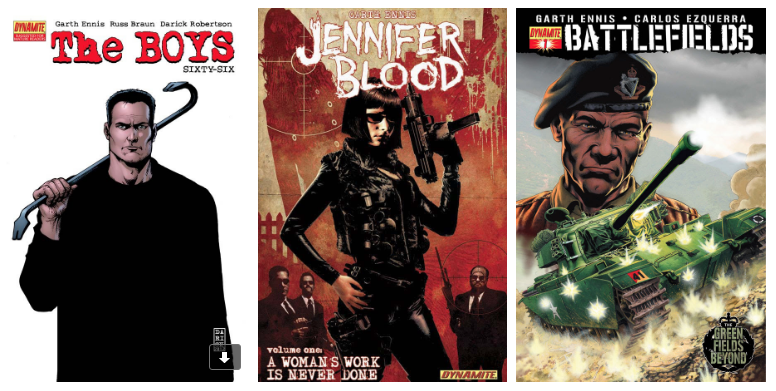 EveryLibrary Institute is a 501c3 organization that supports library funding in the United States.